Certainty: The Fool’s Drug of Choice

Malaysian Moth just emerged from its cocoon and spanning larger than my hand. Photo by Sarah Tracy.

A couple weeks ago, I posted this on Facebook.

Certainty is a small warm cocoon that feels so good, until we realize how it cuts off learning, dialogue, relationship, and creativity. Courage is to break free of this small dark place, shine our soft underbelly to the world, and say, “I don’t know.”

Several friends suggested I write more. Since that time, I’ve written bits and pieces of what follows. None of it seems earth-shattering, but it fleshes out my original post.

Lately, I’ve spent a lot more time with children. I watched my niece and nephew, four and seven, for several days in June, and have been regularly hanging out with my new “Little Sister”, seven-year-old Arianna.

One thing I’ve noticed is their almost constant curiosity. Lydia noticed a tiny squirt bottle of water flavoring in my pantry, and asked, “Aunt Sarah, what’s this?” Zander, in my MiniCooper Clubman, “Aunt Sarah, how fast can you go?” Arianna, “Do you have a house? Does that mean you have a garage?” Their questions, in turn, unfolded into discussions that allowed them to learn something and helped me to appreciate and consider my world anew. Every once in a while, though, I noticed something else in their talk. It unfolded something like this:

Sarah says: “I like to eat a lot of vegetables. They give me vitamins to fuel my body.” The reply: “I know.”

On its face, this response of “I know” is pretty darn innocuous. It’s affirmation. It’s agreement. It’s definitely not counter-argument or trying to make me wrong. So what’s the problem? Why does the response, “I know,” irk?

I suspect there’s lots of reasons—some of them having to do with realizing that children don’t always interpret my unsolicited advice as helpful; others having to do with the fact that most people want to lay claim over some domain of knowledge. However, I think the effect of “I know” is more toxic than that—and that’s what my original Facebook post was about.

About right now, you might be saying to yourself, “I don’t reply to others by saying ‘I know,’” or “This is a child thing.” But, as people grow older, it seems we just become increasingly clever in our ways of saying, “I know.” We hide it behind sophisticated screens of logic, facts, research, and sarcasm. We hide it so well that we don’t even see it–and this is a bad, bad thing, in several different ways.

First, a posture of “I know” is the enemy of learning. Children are amazing models for not placing significance on or being self-conscious about doing things less than perfectly. If a tiny ballerina cannot twirl yet, he or she makes a delightful mess of spinning until it’s learned. In contrast, when we adopt a posture of “I know,” then it’s a BIG DEAL and SOMETHING IS WRONG when we don’t know or do something perfectly.

Second, “I know” shuts down creativity and growth. “I know” functions as an a priori posture where a person must feel certain and successful before he or she can begin a project or engage in a certain conversation. I’m not knocking planning or education. I’ve spent more than half of my life in school. Strategies, itineraries, and expertise can serve as great resources for execution and confidence. However, too often we treat our expertise and knowledge not as resources to pull from when useful, but instead as rigid armor that we can never let down. As such, the knowledge and expertise becomes a screen through which the world is known, and becomes a burden that cuts us off from seeing the world and other people freshly, for what they are, TODAY.

When we hold onto our armor of certainty too tightly, we cannot be present for opportunities along the way. We gather all our evidence before we engage in dialogue. We need a perfect outline before we write. We create a strict itinerary before traveling. With these bastions of certainty clutched tightly in our sweaty grip, we see changes in our plan, or questions about our carefully crafted viewpoints, as obstacles to avoid or threats to annihilate. And, in the worst of cases, feeling like we need to know everything first paralyzes us in a stagnant pool of the familiar, mundane, and trivial. We miss out on the myriad adventures of plunging into the unknown.

Third, when we can embrace uncertainty, possibility opens up. The hiccups and outright challenges to our perfect plans / conversations / projects become contributions to the journey rather than reasons to be angry, or to make another wrong, or to chastise ourselves for not knowing better—something that Jon Camp beautifully discusses in relation to travel here.

Indeed, creativity and growth comes through process, flexibility and openness.

When I think about the people I admire, it’s those who consistently have the confidence and courage in themselves to adopt a posture of “I don’t know.” And even, “I don’t know what I don’t know.” Two examples come to mind.

First, for years, Belle Edson led several friends including me on a trip to Rocky Point, Mexico. Belle never knew exactly where we were going to stay when we got there. At first, this made me, a planner, very nervous. However, over time, I realized that her openness to uncertainty about our final destination was what made it possible to stay in the most beautiful locations for an affordable cost. We certainly could have reserved a place in advance, but it would have been much smaller and more expensive. Certainty comes with a price.

Second, a great example of living in a space of “I don’t know” is my mom, Malinda. She’s an educated 73 year-old that I’m confidant could have handily gotten through life based solely on the knowledge she’d accumulated by age 40. However, even as she has retired and moved to Arizona, she has continued to learn and grow. She reads “how to” and personal growth books (in addition to many others), takes swimming lessons, and is open to unfamiliar and alternative medical approaches. Because of this, she’s learned new ways of coping and flourishing as she serves as a primary caretaker for her husband, has become one of the fastest senior swimmers in the country, and has received and practiced physical therapy so she can remain physically fit. She is vibrant, alive, and always asking questions.

It’s a lot of fun to be around people who take a posture of “I don’t know.” In contrast, it’s not so delightful to be around people who are always in a space of truth and certainty. People who must always be right in conversation, by default, make other people wrong. From such a vantage, conversation is not a dance of ideas in which we might emerge on the other side as better informed or gaining new insight. Rather, it is a battle of “I’ll show her,” and “I’ll get him.” Even when we agree with such people, being around “I know” is exhausting, stale, and anxiety-producing.

This is backed up with the latest neurochemistry research available via the Harvard Business Review. According to this research, people create oxytocin (a feel-good hormone) in response to conversations that stimulate discussion and curiosity. In contrast, when people face those who are focused on convincing others, their bodies create cortisol (a hormone that shuts down the thinking center of our brains, activates conflict aversion and protection behaviors, and is linked to anxiety and weight gain). 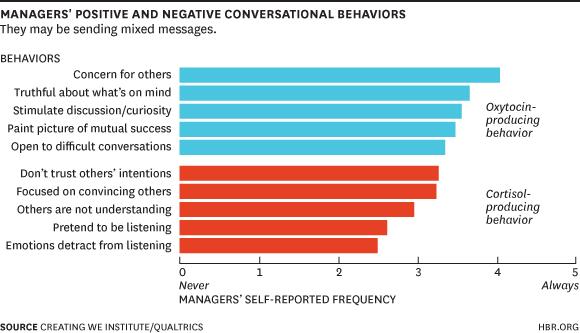 Of course, there’s good reason why we hold onto a stance of, “I know.” Like a drug, certainty is intoxicating. It feels good. But its high is hollow and short-lived. Certainty clings to past plans, expertise, opinions, beliefs, values and can cut us off from living life as lived—in all its glorious messiness and ambiguity—TODAY.

Adopting an “I don’t know” approach to life also takes courage and vulnerability. There are people in life (especially those heavily shielded with the armor of certainty) who pounce upon others’ vulnerability like drug addicts craving their next hit. I was target in such a situation recently when one of my Facebook friends asked, “Why would anyone support Obama in this latest terrorist situation?”

I answered something like, “I haven’t been following the story in the last several days as I’ve been watching my niece and nephew. I’ve heard bits and pieces from The Daily Show and NPR. Maybe I’ll read up and get back to you after I get back to my regular news routine.” In response, I was immediately met, with, “I have noticed most Obama voters get their information from places like Facebook and the Daily Show.” Bam!

In this situation, my saying, “I don’t know” (and sharing my current knowledge sources) was invitation to get my belly squashed. It stung a bit, but I wasn’t terribly surprised given the history of what has showed up on this person’s Facebook feed. Despite the sting, having my belly squashed really isn’t that bad compared to living in a dark, small, and suffocating space called certainty. It seems better to live life with adventure, creativity, vulnerability, and growth—in a posture of “I don’t know”—even when it means some scars and bruises along the way.

Of course, I may be wrong.